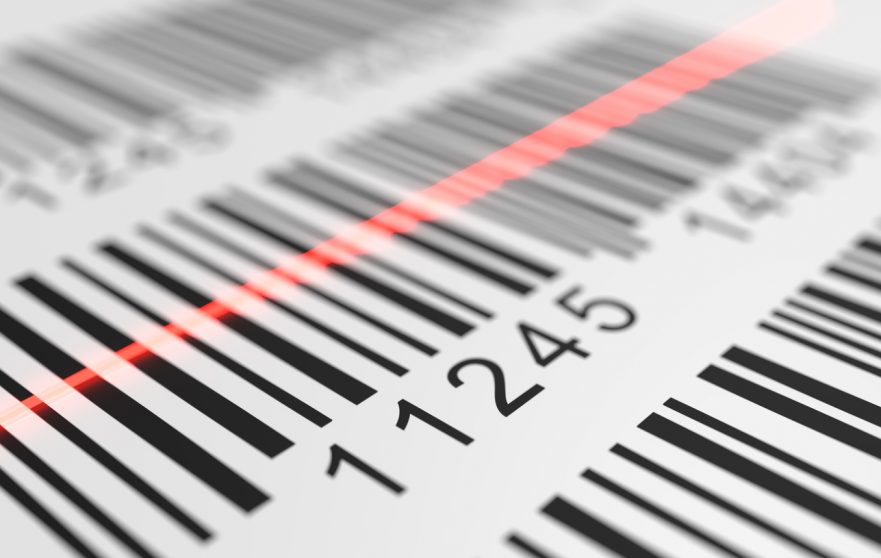 Whether used for warehouse inventory management, in a retail setting, or for package tracking during shipping, the usability and endurance of a barcode is essential for every application. A barcode quality grade is intended to do just that — verify the quality of your printed barcode so you know you can count on it to perform in its necessary setting.

Previously, we discussed ANSI grading and how it ensures the high quality of barcodes. Now, we want to take a deeper dive into the nine quality parameters that are tested during ANSI grading and describe what each means for barcode performance. 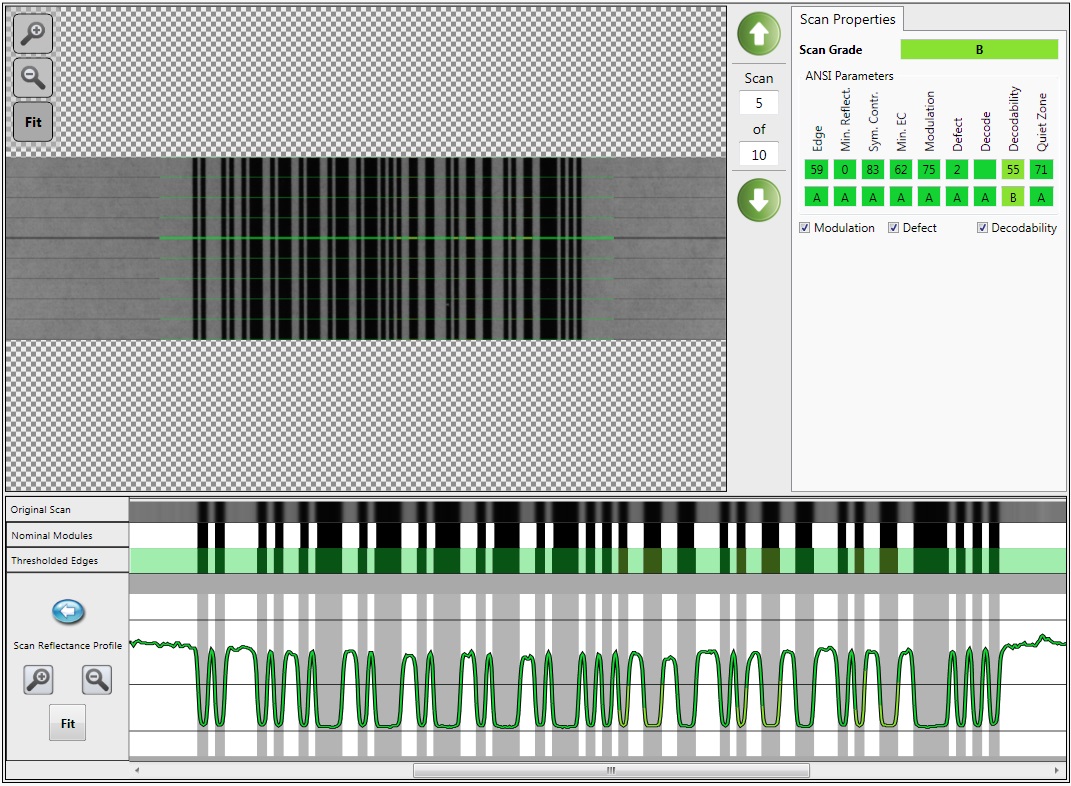 Without further ado, here is a breakdown of the nine parameters that go into barcode quality grades.

In order to be discerned by scanners, every bar and space must pass the minimum Global Threshold, established by drawing a horizontal line midway between the highest and lowest reflectance value. If any peak lands below or valley lands above the Global Threshold line, then the barcode will fail on Edge Determination.

A couple of the most common reasons for Edge Determination failure are ink spread and faint printing. Ink spread can affect the visibility of smaller spaces, causing them not to be detected by the verifier. On the opposite end of the spectrum, if a narrow bar prints too weakly, the verifier may fail to pick it up.

Minimum Reflectance is also a pass or fail criteria. It measures the darkness of the bars on a barcode. The darkest bar’s reflectance must be equal to or less than half of the highest reflectance value of a space to pass. For instance, if the highest peak for reflectance is 78%, then at least one valley must dip below 39%.

This, like Edge Determination, is a relatively simple criteria to pass, and most barcodes should not run into any issues with Minimum Reflectance. If a barcode does fail for Minimum Reflectance, a couple of possible fixes are using darker ink or increasing the heat on thermal printing.

Symbol Contrast is graded A through F, as opposed to the last two pass or fail criteria. Contrast refers to the difference in coloration between the background and bars on a barcode. For instance, a pure white space next to the blackest black bar would be represented by 100% contrast.

Symbol Contrast is determined by the difference between the highest reflectance value and the lowest reflectance value, including quiet zones, which are the spaces on the right and left edges of the bar code. Higher values lead to better grades. If a background is too dark or the bars too light, this can negatively impact readability. A barcode’s Symbol Contrast grade may also be affected by whether a laminate is present over the barcode, as the shininess over spaces may reduce recorded reflectance values. 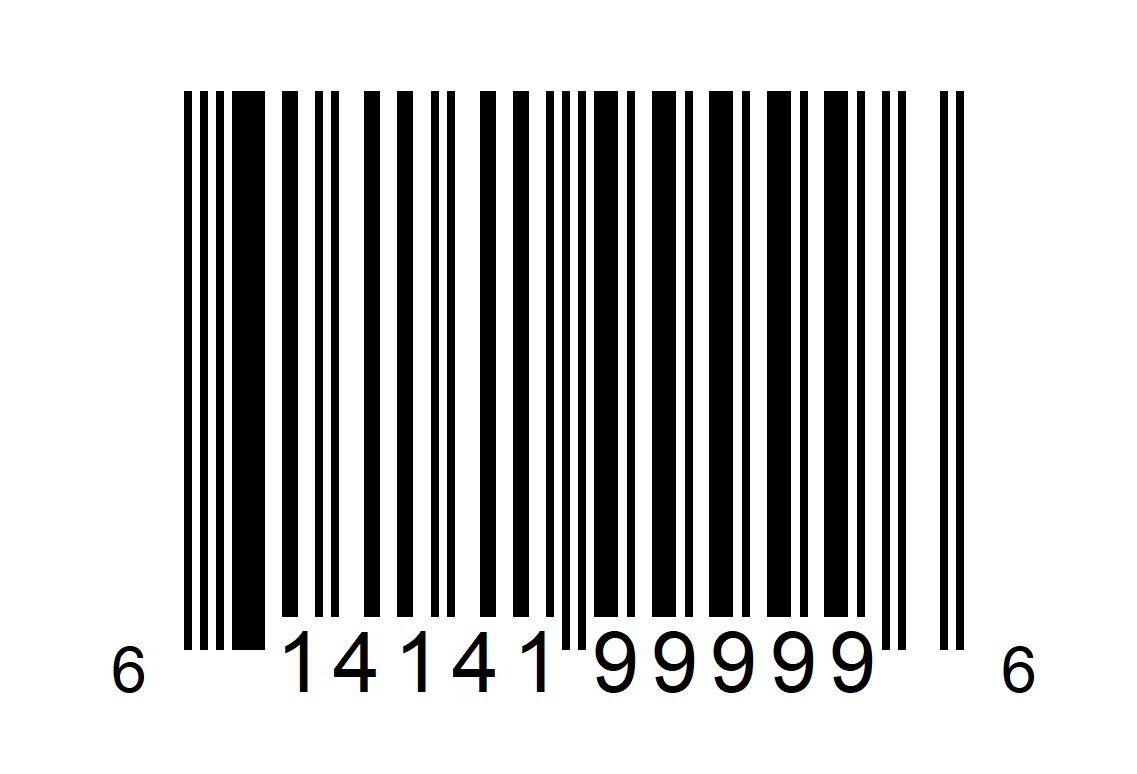 While Symbol Contrast measures the largest contrast value to determine the quality of the barcode’s overall color contrast, Minimum Edge Contrast makes sure that the smallest contrast value found on a Scan Reflectance profile is still high enough for a bar and a space to be distinguishable from one another. This helps to ensure that even the lightest or most narrow of bars can be picked up by the scanner alongside darker or thicker bars.

While a certain level of variance between narrower and wider elements is to be expected, in this criterion, you want to see more consistent height levels between peaks and valleys rather than several radically different heights. Scanners also often record spaces as being less wide when compared to bars of the exact same width, which affects Modulation as well.

Issues with Modulation mostly occur with laminates on top of barcodes because their thickness affects the readability by acting as a lens that skews what the bar looks like to the reader. A low Modulation grade can also be a sign of ink spread, which can make already narrow spaces even narrower and more difficult to pick up. A simple fix for a barcode that fails the Modulation criteria due to the difference in how a scanner detects spaces and bars of the same width is to make the narrowest spaces slightly wider than the narrowest bars.

Defects are graded A to F depending on the severity of any found issues and is mostly self-explanatory. Common defects include voids in the print on the actual bars or ink spots in the spaces or quiet zones.

Defects are very clearly visible on a Scan Reflectance Profile, as they disrupt the normal flow of waves. Any irregularity captured by the Scan Reflectance profile is included in the Defects grade to determine whether it compromises the readability of the barcode, either by making a bar indetectable or a space with a spot seem like an extra bar.

Decodability is graded A through F and examines how well a scanner reads what the numbers represented by the barcode should be. Each symbology tested requires a different decodability calculation formula, which can be found in the ANSI/CEN/ISO Bar Code Print Quality documents and the ISO symbology standards.

Decodability makes sure that element widths are correct. Essentially, it verifies that space and bar thicknesses are correct according to the other bars and spaces that are present. We follow code 128, which dictates the presence of four different bar and space widths. The narrowest space and bar should be the same, the next thickest should be two times, then three times, then four times that narrowest width.

Decode is another pass or fail parameter that can indicate dimensional errors. This criterion basically determines whether a barcode is readable because it involves decoding the symbols from the barcode into the correct series of intended valid characters.

To determine whether a barcode passes or fails for Decode, one must use the standard Reference Decode algorithm for the given symbology and application. If a barcode fails for Decode and passes every other parameter, it may be a sign that the barcode is incorrectly encoded. If that is the case, barcodes created by the same equipment around the same time may also be affected and should be checked.

The quiet zone is an area absent of any text or graphics on the right and the left of a 1D barcode. For standard 1D barcodes the required quiet zone value is usually the larger of 10 times the minimum bar width or 0.25 inches, although this can vary depending on the application.

This criterion is pass or fail, as barcodes either have the correct required quiet zones or they don’t. Quiet zones are necessary in order for scanning equipment to properly pick up a barcode, so barcodes must not be placed too close to the edges of packages or have overwrap that negatively impacts how scanners register this quiet space.

ANSI grading can be complicated, so you’ll want to work with experts who have years of experience in determining barcode quality grade and solving any barcode problems that may arise.

Connect with TKG to put our ANSI-graded barcodes to work for quality you can trust.

The Kennedy Group, a family owned and operated business since 1974, is a leader in providing market-tested and innovative solutions to help customers package, promote, identify, and track their products.

Please Note - If wanting to purchase over 100 rolls of a specific rack placard or, 10,000 of a specific container placard you must call 440-951-7660 to custom order. Ground shipping within the U.S. only. Dismiss